“Carrying the legacy from old leaders?”

But recently his decision on spending Rs. 15,00,000 (Fifteen Lakhs) for the Statue of Anil Adhikari aka. Yama Buddha has really disappointed me. I am a big fan of Yama Buddha but is it the right way to spend the taxpayer money? This decision reminded me of the same decision that old leaders used to make.

For instance, View Tower build in memory of Janayoddha in Rolpa;

I don’t think it is a bad idea to honor Yama Budhha but as I mentioned above it dragged me to the same decision made by the previous leaders. We wanted change and I am sure that is why people trusted Balendra Shah and voted for him. Lastly, It’s obvious to have a different expectation from the leader with new perspectives and ideas.

What to do then?

Instead of spending 15 lakhs on Statue; he should look for the best approaches.

For instance, Ujjwal Bahadur Thapa’s Organization has been providing scholarships and donating to orphanage.

Endowment fund has been established by Professor Dr. Bipin Adhikari, the founder dean of School of Law at Kathmandu University, named as, “Dr Bipin Adhikari Endowment Scholarship Fund”. The amount of the fund is Rs 20,00,000 (Twenty Lakh only).

Likewise, The amount Rs. 15,00,000 (Fifteen Lakh Only) can be used as a providing scholarship, orphanage,  institute, etc. due to which it would get to set their future. Or, I say, don’t just make a statue, make a park where many rappers can chill out and write their songs.

If this trend(making statue) goes on then if someone from my Generation becomes Mayor or in the respective position then he/she would be spending taxpayers money on statues of Sajjan Raj Vaidya, Bartika Yam Rai, Yabesh Thapa, and many more. I see this decision highly biased and favoritism.

As per news reports, Mayor Balen is said to have made this decision to respect Yama Buddha’s contribution to NepHop and for making it famous worldwide. Yama Buddha is the idol of many Nepalese youngsters and keeping that in mind the decision to make the statue was made. However, this step doesn’t seem rational as a better way to honor Yama Buddha would be to lead forth his contribution and make NepHop better and greater.

However, Yama Buddha Foundation has been carrying out numerous social initiatives in the meantime using donations from others’ charitable funds. Even if it has to, the Yama Buddha Foundation can raise the funds to build a statue. He can help them with management and land to build it in specific areas. But, building a statue with the taxpayer money is more biased and sympathetic. I hope Mayor Balendra will reconsider making this decision.

In conclusion, This is very good initiative taken by Balendra Shah (Mayor of Kathmandu), but the implementation process which is spending taxpayers money for a Statue is same thing done by the previous leaders; instead he should form Scholarship provisions because if one unprivileged gets that Scholarship, he/she may go on to be one of the faces to change the music industry of Nepal. 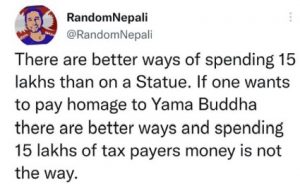 Rastra Bimochan Timalsena, known as Random Nepali is a Advocate and a Youtuber. 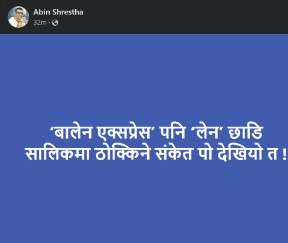 Abin Shrestha is a senior cartoonist at Kantipur Daily.

And he did, which is great, but to honor Yama Buddha and his numerous contributions, development in Nepal’s Music Industry as a whole and making it known to the whole world would leave a deeper impact.